Ambassador Gergő is a Record Breaker

All of our Gemar Ambassadors are very special, with a great talent for balloon art and a passion for innovation and pushing the boundaries of their skills. Recently our Hungarian Ambassador, Gergő Vilaga, decided to push that boundary even further by taking part in a Guiness World Record attempt.

After many hours of training and practice, Gergo took to the stage in Szeged on August 20th. There were 3000 people in the audience, all watching with bated breath to see how Gergő would do. It was a terrifying prospect to perform in front of so many!

With the judges ready with their stopwatches, Gergő began his challenge. He was attempting to make five balloon models as quickly as possible, blindfolded. Working purely by touch, Gergő took the inflated balloons and skillfully twisted them to form a snail, flower, caterpillar, sword and a small dog. The previous record was 51 seconds, but Gergő smashed it by completing all 5 models in just 44.25 seconds and became the new World Record Holder. That’s less than 9 seconds for each sculpture!

It takes a lot of time and dedication to become the best in the world and Guiness World Record holders show what can be possible when you’re committed to achieving a goal. They are an inspiration to everyone and we are very proud to have Gergő as one of our Ambassadors. His skills are truly unique. As it says on the certificate, Gergő really is officially amazing.

Not only that, we now know exactly who to call next time we need to finish a sculpture in a hurry! 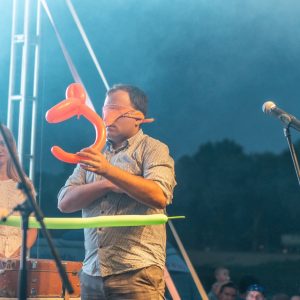 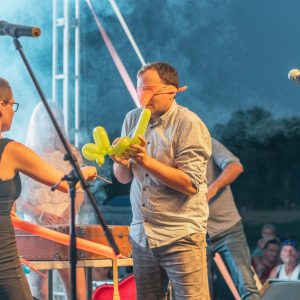